Across Canada, the U.S. and around the world, peace activists will be on the streets from October 15th to 23rd, demanding an end to imperialist wars, occupations, sanctions and military interventions. This call to action was initiated by the United National Antiwar Coalition (UNAC) in the U.S. and has been taken up by the Canada-Wide Peace and Justice Network, a coalition of 45 peace groups across Canada.

No to imperialist wars

For over 30 years, we have witnessed the acceleration of brutal imperial wars by the U.S. and their allies, including Canada, against the former Yugoslavia, Afghanistan, Iraq, Libya, Syria, Haiti, and other countries. These wars have killed millions, turned tens of millions into refugees, laid waste to infrastructure, impoverished citizens through sanctions, and overthrown governments. With the full support of the governments of the U.S. and Canada, the Zionist Israeli regime has continued to occupy Palestine, brutally kill and imprison Palestinian people, including children and journalists, demolish Palestinian homes and routinely bomb Gaza.

When fleeing homelands that have become war zones, refugees are subjected to harrowing and dangerous journeys and met with racism and discrimination in the very countries responsible for the destruction of the refugees’ original
homes.

From October 15th-23rd, activists will be saying NO to imperialist wars, occupations, economic sanctions, and military interventions, and YES to self-determination!

Today, the United Nations deems Yemen the world’s worst humanitarian crisis, after seven years of Saudi-led, U.S.-backed and Canadian-armed war. This war has killed over a quarter of a million people, and has displaced an additional four million people. The Saudi-led coalition has bombed Yemeni markets, hospitals, and civilians, and yet Canada has exported over $8 billion in arms to Saudi Arabia since 2015, the year the Saudi-led military intervention in Yemen began. The Trudeau Government continues to profit from its controversial $15 billion arms deal for armoured vehicles–killing machines which have been used against people in Yemen and in Saudi Arabia.

From October 15 to 23rd, activists will be calling for an end to the Saudi-led war on Yemen and demanding that Canada Stop Arming Saudi Arabia!

While Canada is gaining ill-repute as an arms dealer to the world’s most despicable war-mongering governments, the Trudeau Government is also bolstering its own arsenal. Since 2014, Canadian military spending has increased by 70%. Last year, the Canadian government spent $33 billion on the military, which is 15 times more than it spent on environment and climate change. Defence Minister Anand announced military spending will increase by another 70% over the next five years on big-ticket items such as F-35 fighter jets, (lifetime cost: $77 billion), warships (lifetime cost: $350 billion), and armed drones (lifetime cost: $5 billion).

From October 15 to 23rd, activists will be demanding NO new fighter jets, warships, or drones! We need billions for housing, health care, jobs and climate, NOT for war profiteering!

Canada out of NATO

The Canada-wide Peace and Justice Network opposes the North Atlantic Treaty Organization (NATO), a U.S.- led military alliance of 30 countries, which undermines global peace and human security and is responsible for the deadly and destructive interventions in the former Yugoslavia, Afghanistan and Libya. For years, NATO has
been provoking conflict with Russia. NATO’s expansion to Russia’s border and its training and arming of Ukrainian security forces have contributed to growing tensions in the region. NATO’s demand that allies buy new interoperable weapons is leading to a costly arms race. Carbon-intensive weapons systems like fighter jets, tanks, drones, and warships are exacerbating the climate crisis. Canada is complicit in U.S. wars and is pursuing an imperialist agenda.

From October 15 to 23rd, activists will be demanding that Canada adopt an independent foreign policy free of all military alliances, including NATO.

NATO’s provocative war exercises and extension into the Asia-Pacific region are raising tensions with China and destabilizing the region. As if that weren’t bad enough, the governments of the U.S. and Canada are further inflaming diplomatic relations with China. For example, Nancy Pelosi, the Speaker of the U.S. House of Representatives, recently visited Taiwan, soon to be followed by a Canadian delegation led by MP Judy Sgro. These belligerent moves contradict the U.S. and Canada’s previous respectful and neutral stance regarding the Chinese position that Taiwan is an integral part of China.

From October 15 to 23rd, activists will be demanding that Washington and Ottawa stop provoking war with Russia and China, and asking that MP Judy Sgro cancel her planned trip to Taiwan!

Canada, US and UN Hands off Haiti!

Canadian and U.S. warplanes have landed in Haiti in the midst of widespread protests for access to food, fuel, and basic necessities and against the country’s imperialist-backed government. Imperialists are planning to occupy Haiti under the auspice of the United Nations. The U.S. has drafted a United Nations Security Council resolution for the “deployment of a rapid action force to Haiti immediately”. This is a very dangerous move by Canada, the U.S., and their allies and will have devastating results for the people of Haiti. As anti-war and peace activists in Canada, we must strongly stand against military intervention in Haiti.

As we take the streets across the country this week for our #FundPeaceNotWar actions, we must stand up against military intervention in Haiti and Canada’s complicity against the people of Haiti. Canada, US and UN out of Haiti! No to New Occupation of Haiti!

The Canada-Wide Peace and Justice Network encourages peace-loving people across Canada to join demonstrations and activities across Canada for the Week of Action from October 15-23 or to organize your own actions.

To view actions in the U.S. and around the world visit www.unacpeace.org.

Together, let’s end imperialist wars and build a loving and peaceful world!

Thank you to everyone who came out to an action on from October 15-23 in 9 cities across Canada to demand that Canada #FundPeaceNotWar.  From October 15th to 23rd,  at least 11 actions took place in 9 cities including Toronto, Calgary, Vancouver, Waterloo, Ottawa, Hamilton, South Georgian Bay, Winnipeg, and Montreal. More photos, videos, and news coverage HERE.

(Updated date as of October 11th)

The Canadian Armed Forces are holding a recruiting event through the Ontario College Information Fair 2022. Socialist Action is committed to non-violent direct action. We plan to disrupt military recruitment by exposing the reality of war. We will protest the event by standing outside the entrance with various signs that inform students of the coercive actions behind the Canadian military’s recruitment. We welcome any anti-war and peace movement organizations to join us in this event.

Please get in touch with us if you are interested in collaborating.

The Toronto Association for Peace and Solidarity and the Canadian Peace Congress are planning to hold a demonstration on Sunday, October 23rd, starting at 1:00 p.m. The venue will be the parkette on the Southeast corner of Spadina Road and Bloor Street in Toronto. 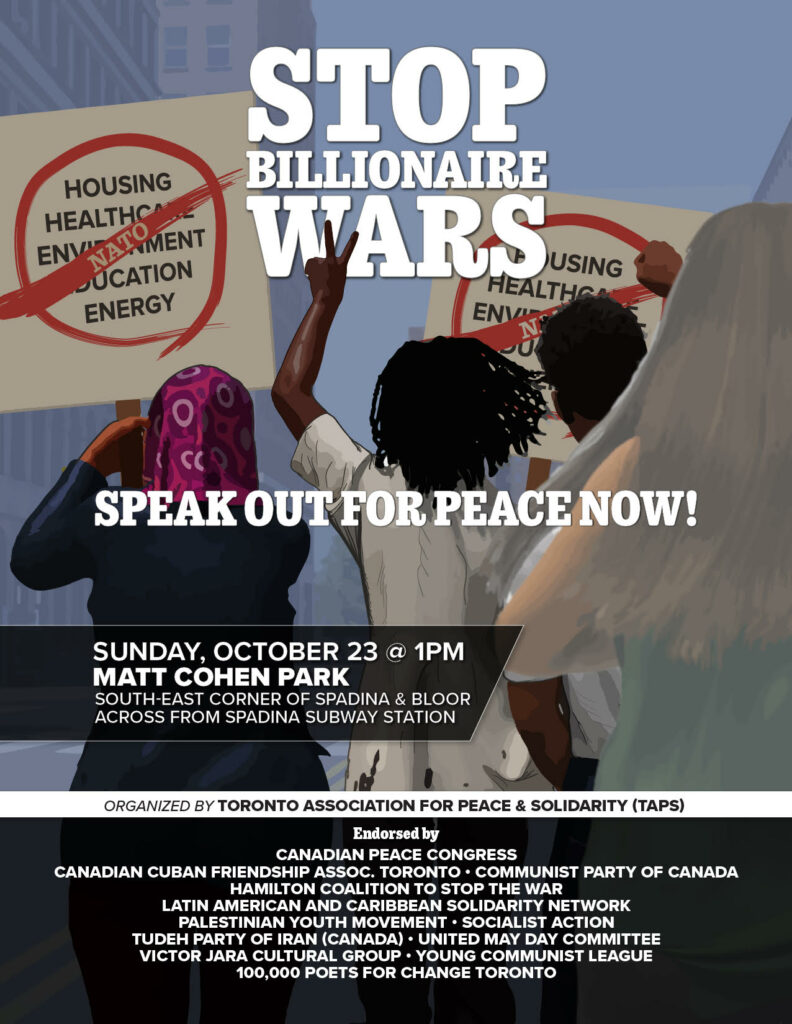 Join International Women’s Alliance (IWA) in Canada and friends at the at 16:30, Sunday, October 16th at Chemin Queen Mary in Côte-des-Neiges.

World BEYOND War Montreal and partners will gather to march to the office of Mélanie Joly,  Minister of Foreign Affairs. The march is about 10 minutes long on city sidewalks. We will have flyers, banners, and a letter demanding that Canada sign the sign the Treaty for the Prohibition of Nuclear weapons.

While the U.S. pours more weapons into the proxy war in Ukraine–holding open the possibility of direct confrontation with nuclear-armed Russia, the war fanatics in Washington seem determined to start even more fires around the world. Nancy Pelosi’s trip to Taiwan; hints that the U.S. may be moving towards confrontation with China as well as strikes against Iran; and reports that new U.S./south Korea war games will practice a “decapitation” strike against the north (DPRK): all show the urgent need to speak out.

Today working people face escalating costs of food and energy, recession, growing insecurity and attacks on efforts to unionize. Sanctions on developing nations hurt impoverished workers there, while U.S. sanctions on Russia and China are at least partially responsible for rising energy prices and the current wave of inflation in many European and N. American countries.

Hamilton Coalition to Stop the War

Register HERE: From Hegemony to Global Democracy: A Teach-In on Geopolitical Conflict

We are very pleased to present a special Teach-In event this month!

On Saturday, October 22, join us for a full two-session Teach-In about the weighty global conflicts that demand the world’s attention.

Our talented panelists will address NATO’s present conflicts with Russia and China, the changes that are happening in the world, and what Canada’s role should be. 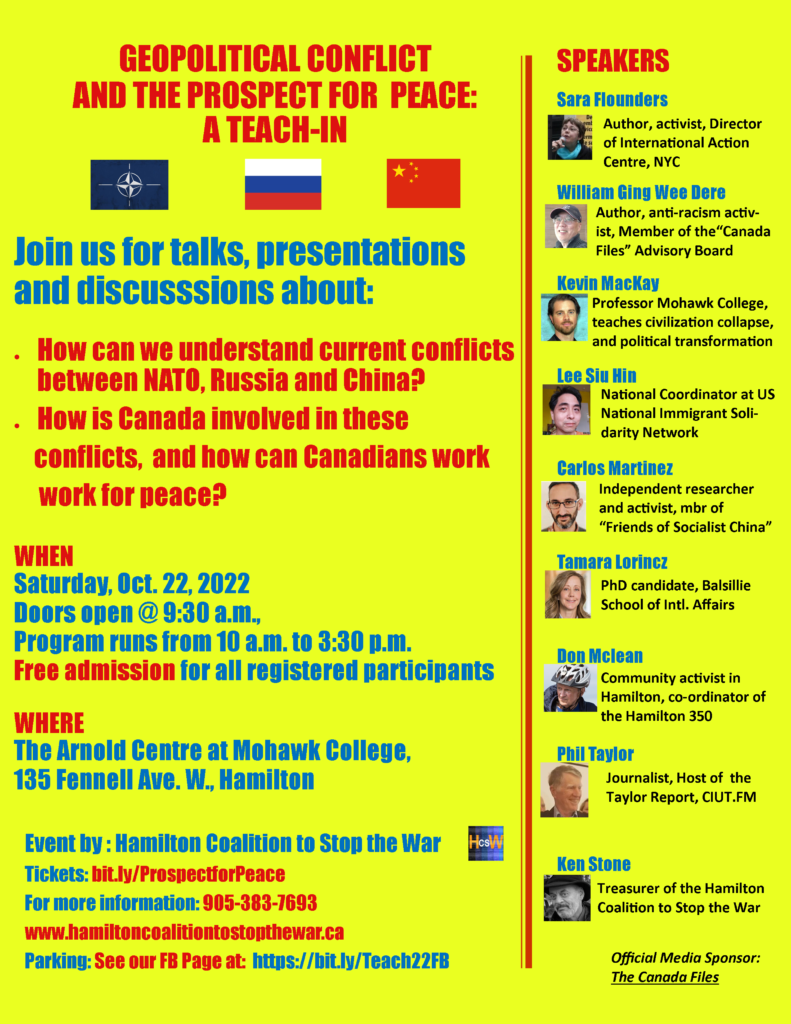 Join us for “Peace Potluck and Fun” 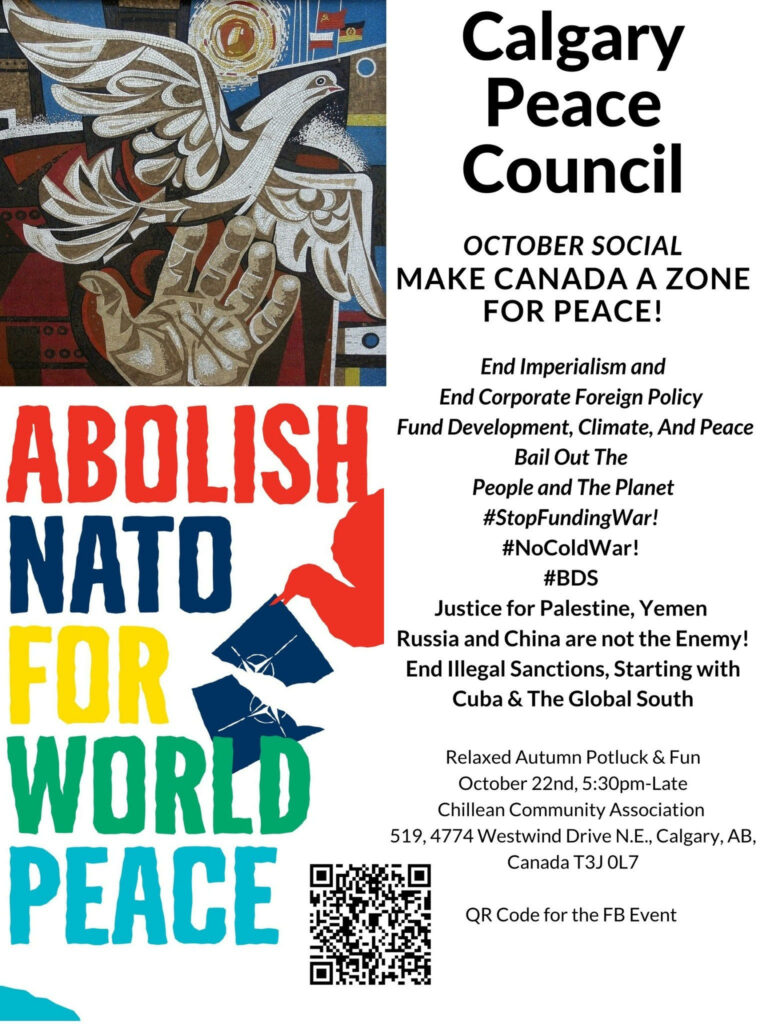 South Georgian Bay chapter of WBW (Pivot2Peace)
will hold an action on Friday, October 21 outside the
Federal Building on Hurontario Street, Collingwood, at 2:00 p.m.

Our peace rally at the Waterloo Public Square this Sunday is in solidarity with the #FundPeaceNotWar Week of Action.

From October 15th to 23rd, join Canadians across the country in demanding NO new fighter jets, warships, or drones! We need billions for housing, health care, jobs and climate, NOT for war profiteering!

We are also calling for a ceasefire and an end to the war in Ukraine. Shamefully, Canada continues to export weapons and military aid instead of supporting negotiations. We are risking dangerous nuclear escalation. We are also derailing global cooperation for climate action and worsening poverty. Canada is also exporting weapons to Saudi Arabia, Israel, Egypt and many other countries that foment violence. All wars must stop including in Yemen, Palestine etc. We need peace for people and the planet! Local event organized by the Canadian Voice of Women for Peace (VOW).

Afterward, we will go to Cafe 22 for coffee. Come & join us!

Just Voices choir will sing three peace songs. We will bring signs calling for negotiations to end the conflict in Ukraine and defuse nuclear war.